In 2014 I took a fossil to the American Needlepoint Guild Seminar in Chicago.
I also took Jane-Beth.

Chicago is big and tall, and The Magnificent Mile is a bit breath-taking. That might have been something to do with having to walk with my neck twisted up to look at the architecture. The city is filled with new glass monoliths, but the older 'skyscrapers' in the centre are a glory of early 20th Century architecture. They're not just buildings, they are works of art. I particularly liked the reliefs on the walls, so I'm putting in pictures of a few of my favourites. 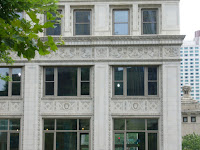 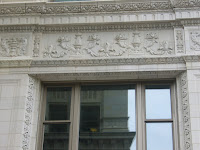 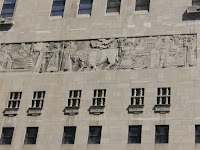 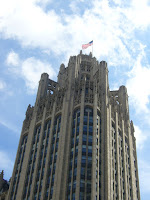 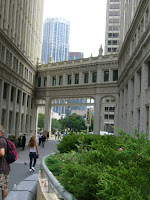 To appreciate Chicago, you really need to accept the crick in the neck.

Of course the main reason for going to Seminar was to stitch, to learn and to exhibit my latest piece of needlepoint.
In 2014 I exhibited "Ammonite"

"Ammonite" started life as a spiral doodle. It was a boring meeting. The spiral was joined by some curved lines and it reminded me of an ammonite. I love the shape of the ammonite, the regularity of the shape and the blending of colours where different chemicals have seeped into the shell and fossilised it.
When I got home I decided to up-scale it into a design roughly based on this fossil: 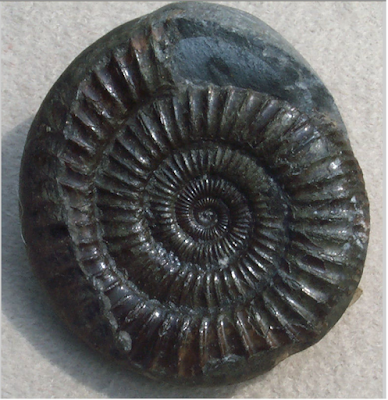 At an early stage I decided that although Ammonites have a regular mathematical progression in the expanding size of their compartments, my maths was never going to be up to the challenge, so I decided to go for effect rather than accuracy. My intention was to capture the spirit of the ammonite and produce a piece of work that was instantly recognisable as the fossil, not an exact copy of any specific fossil. 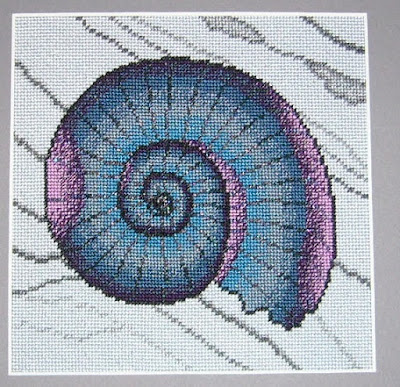 Ammonite measures 6" by 6" and took 100 hours to design and stitch. It is worked in basketweave on 18 count pewter canvas. The outline and the dividing lines between the chambers are done in Kreinik braids. The infill of the chambers is Soie d'Alger. I used six different colours on the infill of the chambers. To achieve the look of the chemicals seeping into the fossil I blended my threads. As the colours fade into each other I started with four strands of one colour, then three of that and one of the next, then two and two, then one of the first and three of the second.
The background, the 'mother stone' also uses thread blending to define the variety of shades and colours found in any piece of stone.

I was quite pleased with this, and so must the judges have been as they awarded it 2nd in Class. It's always nice to get the recognition.

Ammonite was later published as a chart, with instructions and stitch guide, in Needlepointers, September 2015, Volume XLIII, Number 5