Things We Do On Our Holidays

We attend the ANG Seminar as often as we can manage. Apart from the classes and the shoppertunities, we like that it moves around, which means that we get to see a different place each year. The days at Seminar are filled with classes, events and meetings, so we always try and arrive a few days early to do touristy stuff.
We walked where we could, and we found the Streetcars. That was fun, even if we did get on the wrong one and end up at the terminus. Still, we saw dozens of fine looking houses and beautiful gardens. Walking, I had the chance to admire the wrought-iron work on the balconies of houses. I particularly liked this one. 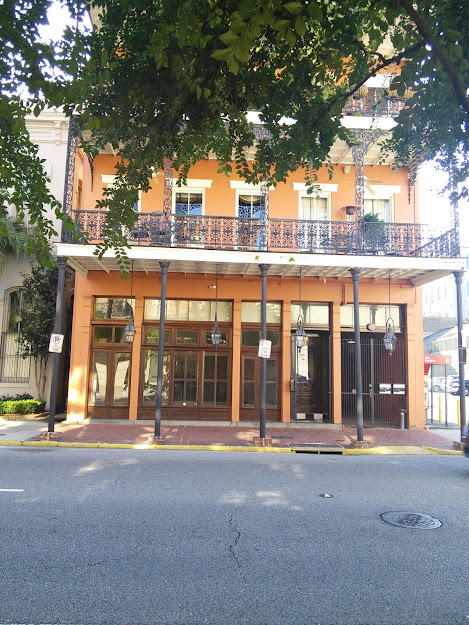 We also found our way (a fairly short walk from our hotel) to the World War II museum. It is big, it is impressive, and it is educational. It's not all 'Blood and Glory', with sections on The Home Front, war industry and a massive archive, as well as many items of the machinery of war. There were tanks, Jeeps, aeroplanes and trucks, and right in the main entrance, a Higgins Boat. And next to the main entrance was a really good Forties themed cafe.
I had heard of Andrew Higgins. Eisenhower is said to have referred to him as 'the man who won the war'. Higgins designed and built the thousands of landing craft required for the Pacific campaign and the Allied landings in North Africa and Europe.
Obviously the people of New Orleans think highly of him as one of their 'Sons' because the street that leads to the Museum is called: 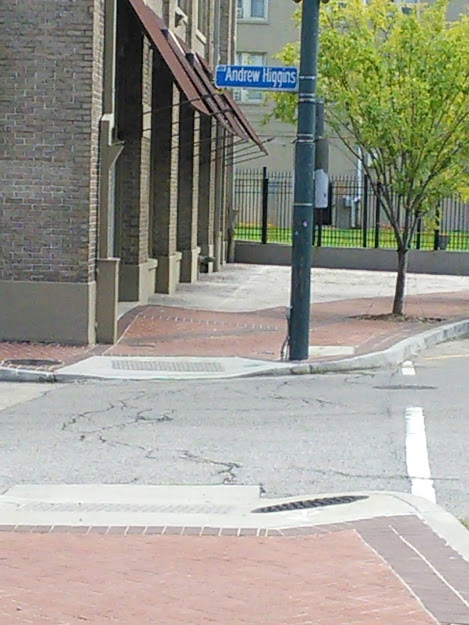 We also visited the Confederate Museum. It was much smaller, perhaps more personal because of that, but equally interesting. Such places may be frowned upon by many, but I think it's important that they exist in some form or other to remind us that history has two (or more) sides, and that to forget it is to repeat it.
Then there's the food. We went with a group of needle pointers to a well known, I might say famous, restaurant that has been there since forever. The food was incredible, a total melt in the mouth experience, and they had good Scotch Whisky. I think I did cause a bit of a stir. The MD, a very nice chap, seemed to find this man-in-the-kilt quite attractive (maybe he just wanted to find out if the rumours about what Scotsmen wear under their kilts are true). Then there was the young lady with her partner who kept looking, and whose expression indicated that she wasn't sure, ours being a group of ladies of a certain age, whether I was a man in a skirt or a hirsute woman (I have a moustache.)
And there was a traditional Jazz band playing in the street outside. As the saying goes, I thought I'd died and gone to heaven.
But what about the classes? Of course I took classes and I'll write about them next time.
Posted by Jonathan G Brown on Monday, September 14, 2020