Who or what is a Kaitlyn?
It's 2017, and she's a who. Kaitlyn is the grand-daughter of the lovely woman who cleans my Dad's house. So how did I get involved in making something for her? It's a bit of a convoluted story.
'Gran', as I'll call her, is only supposed to do the heavy cleaning, but we all know that she spends longer with Dad and does more for him than she gets paid for. Elder Brother, otherwise referred to as The Major Domo was trying to find some indirect reward that she might accept as a recognition of this. Had we any ideas? Well I did.
Occasionally, when across to visit him in my capacity as Head Gardener (for those who remember The Herbs, they call me Bayleaf) 'Gran' would be there and we would chat about all sorts of things. She was fascinated that I embroidered and knew stuff about Japanese things as Kaitlyn was 'into' Japanese things and was decorating her room in a Japanese sort of style, loved Kimono and so on. It was coming up to a Birthday (or maybe it was Christmas) and 'Gran' was trying to find something in a Japanese style for Kaitlyn who wanted 'a Japanese Scroll' to decorate her wall. I suggested to The Major Domo that I could stitch a scroll using Japanese embroidery techniques, which 'Gran' could give Kaitlyn as a unique gift.
Offer made, offer accepted.
First, of course, I had to come up with a design. I decided that a simple scroll with her name in a Japanese script would be just the thing. I looked up her name on a few translation sites and found Kaitlyn in Kanji and Katakana. It looked very 'heavy' in Kanji, but the Katakana had a lighter feel to it, more suited for a young girl (she was just approaching her teens).
Translated, Kaitlyn means 'purity' so my design had to have a clean and unencumbered look. I looked at name 'chops', which led me to the idea of a simple border in red with the Katakana in black, edged with couched silver, on a white background.
I drew out my design and offered it to TMD.

"Go for it," he said
I did. I decided that the best fabric to use would be Shioze as it is quite heavy, but easy to stitch on (the prominent weave helps with maintaining the angles of the stitches). Then I had to frame up. As I had intended from the start, this was to be stitched in the manner of Traditional Japanese Embroidery, so the cotton end pieces had to be stitched to the silk Shioze and then wound drum tight and stretched on the frame. Once the silk was mounted, I made a stencil of the design on tracing paper and attached it using magnets while I copied a running stitch outline of the design. 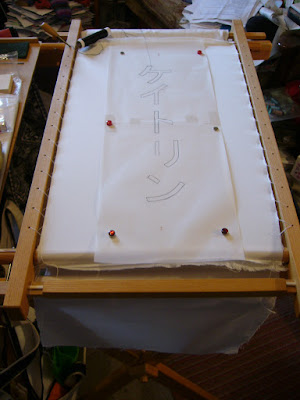 If you've never seen one before, the frame may look a little different to what you're used to. The point is to keep the silk as tight as possible during the stitching process, so the rollers at the end are split to give added grip and the fabric is stitched along the sides to ensure that it is well stretched. Incidentally, Traditional Japanese Embroidery is worked from the side.
Having transferred the pattern, 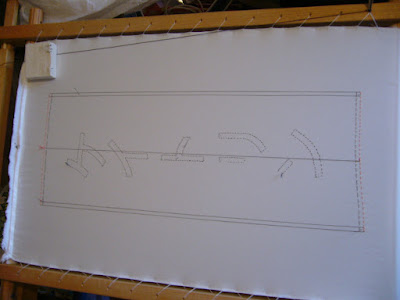 I was ready to start stitching.
Following the rules, I began with the Katakana. These were stitched in black flat silk which was either worked as flat silk or twisted by hand by me where I wanted to use a twisted silk. Each symbol was worked in a different stitch. 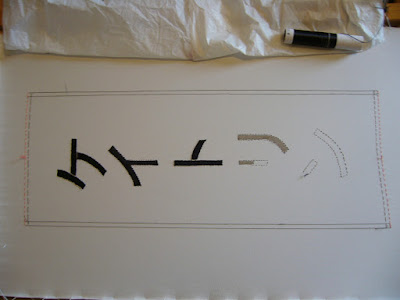 Then the border was added. The tissue paper is there to protect the embroidery. It always ends up a bit tatty and torn as I only uncover that part of the piece I am working on in that stitching session. 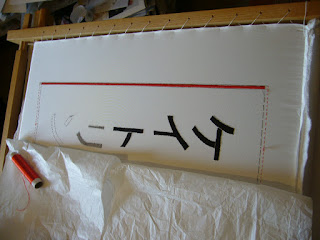 Then the silver was couched round each of the Katakana, and gold on the inside and outside of the border. 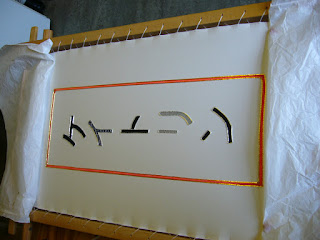 And still it wasn't finished.
When the stitching is done, the frame gets turned over for the first time. The manner of starting and ending threads in Traditional Japanese Embroidery means that there is no weaving through the back, and no big knots. Once it's on its back it needs to be starched, steamed and dried. This has to be done very carefully as the starch should only go on the back of the embroidery, otherwise it might stain the fabric.
The finishing touch, once it was off the frame, was to turn it into a scroll by attaching it to some heavy (furnishing) fabric and a hanger. 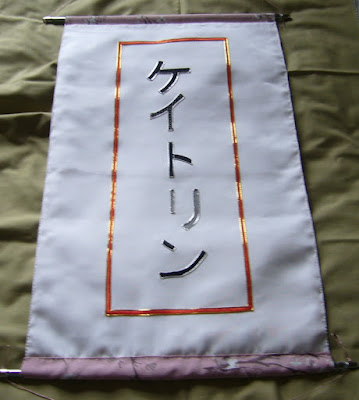 It took me 60 hours to design and stitch Kaitlyn, which measures approximately 14" x 24". I enjoyed working on it as much as I enjoyed the look of pleasure on "Gran's" face when I gave it to her.
Also, 'Gran' comes up trumps by providing an absolutely unique present.
Posted by Jonathan G Brown on Thursday, October 08, 2020