What's in a Name?

Last night, Jane-Beth mentioned that it was over a month since I had last updated my blog. A month? When I looked, it was over two months. Where does time go? I mean it's not that I've been doing nothing, but these are, as the politicians and commentators tell us, Unprecedented Times, and we're probably all a bit out of kilter.
It's been nearly a year since the Pandemic hit the UK. and it's been a year unlike any other that I can remember. That's despite many of my 'friends' claiming that I'm so old I remember The Black Death ("Not enough people left to bury the dead.") of 1384.
You may well have guessed that since I am writing this, we have not been smitten by Covid. That's mostly down to Jane-Beth, who has kept me inside most of the time. I have been Locked Down, Shielded, Protected, and now I'm back in Lock Down again. Despite the arrival of vaccines I fully expect to remain in Lock Down until at least May. It's not that I'm a pessimist, but it takes time to inoculate over Sixty Million people.
We had a bit of a relaxation of the restrictions over the summer, which did allow me to go and visit my Dad and get his garden tidy. Gardens, aren't they incredible? Before the pandemic I spent five years bringing some semblance of order back to a garden that hadn't been as much as weeded or pruned for at least ten and maybe nearer fifteen years. Between April and July I couldn't visit him because he lived on the opposite side of the River Forth. When I got back in August it was like the garden had grown two years in three months!
I was glad I was able to get back to visiting him. I'm not sure he actually knew who I was by then other than 'a young relative who comes to do the garden'. Old age and dementia had taken its toll on Dad, and at 93 years old, and never having recovered from a stroke he had some years ago, Dad took another stroke in October and didn't recover. Pandemic restrictions meant that only immediate family and grandchildren were able to attend his funeral, but we gave him a proper send-off. Dad had spent years in the military, starting during WWII, then later as a Naval Chaplain, so he had the flag-draped coffin with the officer's cap and his medals on top of it. No hymns allowed, everyone masked, and only the Minister allowed to speak, but he went off to the music of Eternal Father (the Naval Hymn) and Sunset. Yes, I got a bit choked. I miss him, but it's for the best. He knew he was, as he said himself, 'aould an' ravelled' and 'abun fit til gang'.
Apologies, but I felt that I had to share that, if only for my own benefit.
"So what have you been doing?" You might well ask. I've been working on a few pieces that might become classes, and as ANG members might have spotted, am about to appear in the next issue of 'Needlepointers'. The Editorial team asked if I would submit a project and I offered them this: 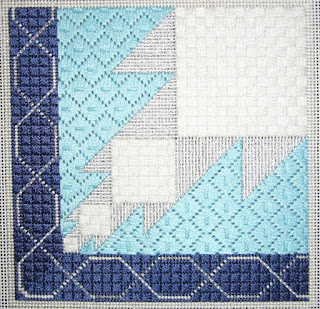 Watch out too for "Thoughts From A Far Country.
And moving rapidly on, A QUIZ.
What is the name of this stitch? 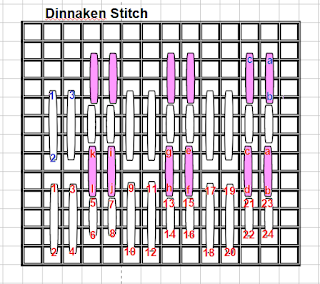 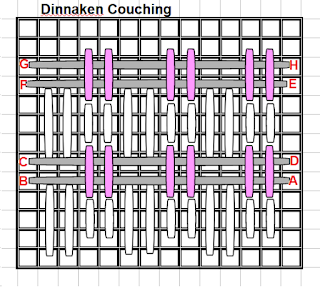 I call it Dinnaken Stitch. Why? Well when I was stitching this: 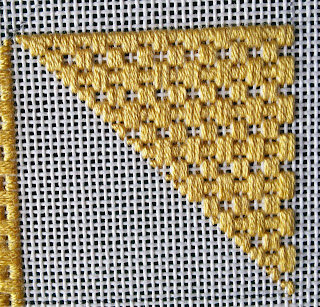 I was asked what the stitch was. Now that one stumped me for a moment. I couldn't remember where I had found it or what it was called, so I said "dinna ken" (translation, "I don't know").
Afterwards, I went through more stitch books than I care to think about - our embroidery library's a bit like an Aladdin's cave - and I couldn't find it in any of them, so it became "Dinnaken" Stitch.
And with couching: 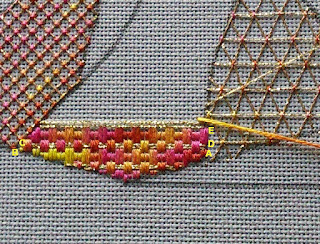 So this is the quiz.
Can you name that stitch?
Posted by Jonathan G Brown on Wednesday, January 13, 2021