Flame Fan began as a rough doodle shortly after we visited an exhibition of Royal fans at The Queens Gallery, Edinburgh, in March 2006. The original sketch was of a single fan, with curving flames. I liked it, but knew it needed more thought. 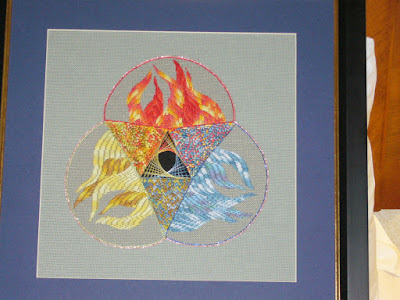 I don't recall why, but something I had seen or read made a connection in my memory and  I found myself thinking that 'out of the darkness came chaos, out of chaos came order'. I don't know if that's a quote or if I made it up, but that got the design moving.

The centre of the design is a triangle of black felt (darkness). The threads that cross the felt disappear into the three triangles where they become random (chaotic). The random nature fades towards the colours chosen for the 'flames' and the flames appear in an ordered manner out of the chaos as Earth, Fire and Water, the three ancient 'elements'. All three fans follow the same design apart from the colours.

I used Needle Necessities Floss Overdyed in six different shades for the flames and the triangles, and couched the outline of the fans in metallic threads from the family stash. The flames within the fans are stitched in a bargello pattern. The insides of the fans are filled with a running stitch using a fine machine embroidery gold metallic, but the rest of the canvas has been left unstitched.

Flame Fan is stitched on 18 count canvas and the framed piece is 20" square. It took me 102 hours to design and stitch. I exhibited this piece at the American Needlepoint Guild Seminar, 2007 in Baltimore. No prizes, but a positive and helpful critique from the judges.