"You've never made anything for your father," said Mother.
(Father is a retired Church of Scotland Minister and Military Chaplain. What do you make for an 'Auld Kirk Meeneester'?)
"What do you think he'd like?" I enquired.
"A cushion?" suggested Mama.
So I made him this cushion cover. It is 14" square and took me 36 hours.

It is based on a famous painting by Sir David Wilkie, sometimes labelled as John Knox preaching at Mary Queen of Scots, but actually he's preaching to The Lords of The Congregation. It shows him, as we say, "geeing it laldy". John Knox is an important figure in the history of the Presbyterian Church in Scotland and had a reputation as a 'Fire and Brimstone' preacher. 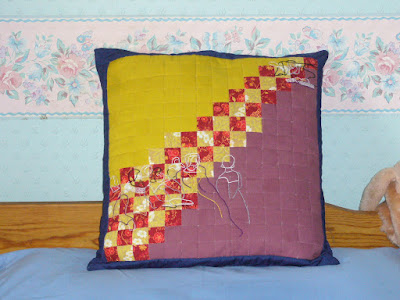 I created the 'ground in one inch squares using English Piecing.
The purple represents the dark recesses of hell where, in his view, the unenlightened would be condemned for all eternity, the gold-yellow represents the enlightened, 'ie' those who agreed with Knox and would therefore be raised up to paradise on the last day of judgement. The diagonal band of red and yellow represents the Knoxian words of wisdom and the threat of damnation thundering from the pulpit and bringing enlightenment (or fear) to those who listen The colour scheme reflects the general trend of lighting in the Wilkie painting.
I then embroidered the outlines of some of the figures from the painting, starting with John Knox at the top right and representations of the congregation at the bottom left. The female figure in the purple area might be seen as a reference to Knox's "Monstrous Regimen of Women"

He loved it!
Mother loved it. "Typical minister", she commented, "Up in the pulpit six feet above contradiction."