B is also for Baltimore

Baltimore, Maryland, was the venue for the 2007 American Needlepoint Guild Seminar. How could we not go? History and embroidery, lots to see and lots to stitch.

It was August and it was hot, but we were not deterred. We braved the heat to walk around and look at old buildings and monuments, and we learned that Peabody is pronounced Pibidi (with short vowels). We also discovered an amazing piece of sculpture, The Katyn Memorial. It is a memorial to the Poles who were murdered in the Katyn Forest in 1940. I was overwhelmed by it, artistically and emotionally. My picture doesn't do it justice so I have included a link to the website. 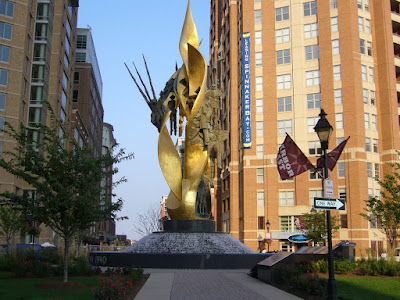 We did not get to Fort McHenry, but we did climb Federal Hill. We even adventured beyond Baltimore to Annapolis. The Chapel at the United States Naval Academy has some beautiful embroidery, and the town is a delightful concoction of Late Stuart, Queen Anne and Early Georgian buildings. 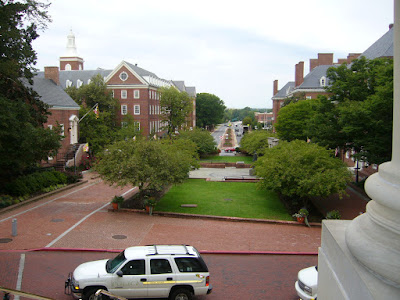 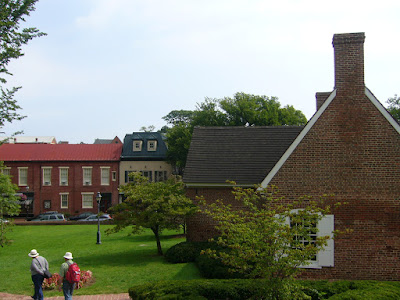 The Chapel at Annapolis was interesting for both the embroidery and the architecture, and of course down beneath it is the grave of that well known and respected founding father of the US Navy/Pirate, John Paul Jones. (Delete as appropriate, I suppose it depends whose side you're on.)

Aside from the Seminar and the sightseeing, three things stand out in my memories of this visit. First, the lightning. We had a number of stupendous lightning storms. Second was being able to sit outside ion the warmth and listen to a "The Wailers" concert. I remember when it was "Bob Marley and...". The third is that at the banquet we sang "The Star Spangled Banner". It surprised some at our table that we knew the words (well some of the words).

What about the embroidery?

Having tried and enjoyed Traditional Japanese Embroidery, I had the opportunity to take a class in Rozashi with Margaret Kinsey. Rozashi is the style of embroidery worked by the Ladies of the Imperial Court and other high ranking households. It is worked in hand, with pre-twisted threads - no need for stropping and laying and no need for my trusty tekobari. The ground material is Ro, so a fairly easily countable ground, and all vertical stitches. 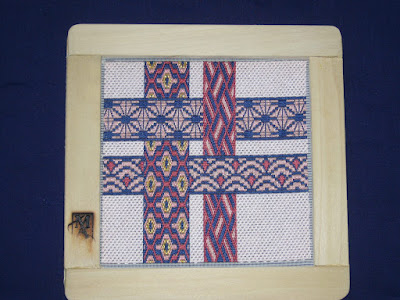 The design is called "Ribbons" and utilizes traditional Japanese designs. This was a relaxed and informative two day class during which we learned the basic stitches of Rozashi and where they might be used.
"Ribbons" is 6" square and took 68 hours to stitch.