"Remember The Alamo."
Not that I do, but when I heard that the American Needlepoint Guild Seminar for 2011 was to be in San Antonio it was probably the first thing that came to mind, closely followed by John Wayne throwing a burning torch into the magazine and "The Green Leaves of Summer".
San Antonio? Had to be!  To paraphrase Congressman Crockett, "Work can go to hell, I'm going to Texas!"

Next question. What was I going to submit to the Exhibit, the annual exhibition and competition? I was looking for some sort of connection, a link that would inspire a piece of work.
Long Story Alert!

There's an old Scottish myth (well not that old) about a Scotsman, fresh from 'The Old Country'. He gets off the ship in Texas and starts walking inland, looking at the place, wondering where to set down roots, when he reaches San Antonio.
The town is in a ferment. There are people building barricades and herding animals into 'yon auld kirk'.
Being inquisitive of nature he stops as passer-by and asks what all the excitement is about.
"Mister," he is told. "Texas has declared its freedom. General Santa Anna is marching towards us with an army of fifteen thousand men. There are one hundred men garrisoning the Alamo, and they aim to stop him."
"Weel 'jings'," quoth the Scotsman. "That's no fair. son. Thoosands against a hunner?"
"General Santa Anna says that when he arrives he will march over the Americanos in the blink of an eye."
"Och he does, does he," said the Scotsman. "Weel if yon's his attitude, I think I'll just hae tae ging in ta yon fort and gie them a hand."

Unlikely or not, I decided I'd do some research. I found the Alamo website. What I discovered was educational, enlightening and made me a little proud of my Scots blood.
There was not a Scotsman at The Alamo, there were four. I also discovered that 30 of the defenders had Scottish ancestry. This was less surprising considering the influx of Scots into America following the Jacobite Risings, but still quite a high proportion.

I was looking at pictures of The Alamo when inspiration, thankfully, struck. I had a link, and I had a general idea of the image I wanted to create. I even had a working title. 4:30:1836 was, if not born, in gestation.

The front view of The Alamo is an iconic image. I decided to take the curve, to ignore all the architecture apart from the front door and the upper window, and use the tartans of the four first generation Scots defenders. The door and window would be replaced with numbers, 30 for the defenders of Scots ancestry, 1836 for the year of the battle. 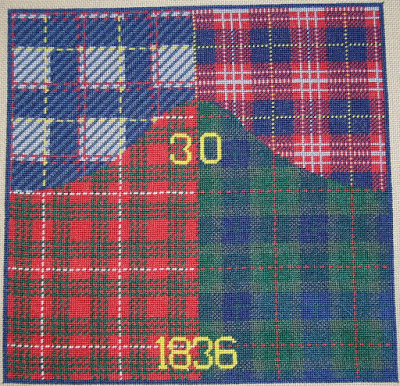 Simple? Well no, not really. I had to graph out each of the tartans, then I had to manipulate them slightly so that the horizontal and vertical lines met in a continuous pattern that drew the eye from one tartan to the next. My notes tell me that I took 70 hours to design this. 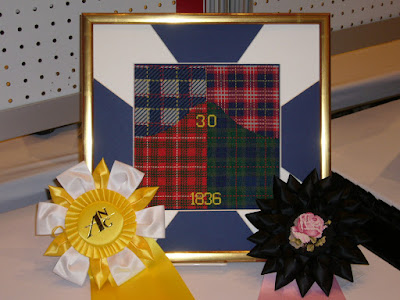 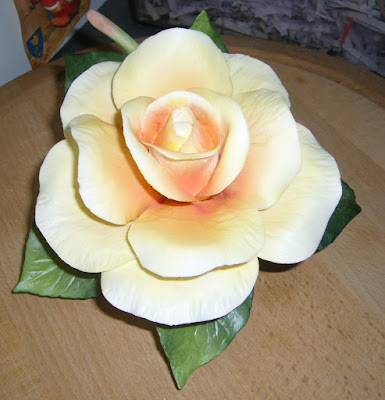 This lovely piece of porcelain lives under a glass dome, and I admit to being so proud to have received it that I'm inclined to show it off.

I couldn't have done it without the four Scotsmen, so I'd like to introduce them:

Richard W. Ballentine was born in Scotland in 1814. He travelled to Texas from Alabama aboard the Santiago and disembarked on December 9, 1835. He and the other passengers signed a statement declaring, "we have left every endearment at our respective places of abode in the United States of America, to maintain and defend our brethren, at the peril of our lives, liberties and fortunes."

John McGregor was born in Scotland in 1808. McGregor lived in early 1836 in Nacogdoches. He took part in the siege of Bexar and later served in the Alamo garrison as a second sergeant of Capt. William R. Carey's artillery company. It is said that during the siege of the Alamo, he engaged in musical duels with David Crockett, McGregor playing the bagpipes and Crockett the fiddle.

Isaac Robinson was born in Scotland in 1808 and came to Texas from Louisiana. He took part in the siege of Bexar and later served in the Alamo garrison as a fourth sergeant in Capt. William R. Carey's artillery company.

David L. Wilson, son of James and Susanna (Wesley) Wilson, was born in Scotland in 1807. In Texas he lived in Nacogdoches with his wife, Ophelia. Wilson was probably one of the volunteers who accompanied Capt. Philip Dimmitt to Bexar and the Alamo in the early months of 1836. He remained at the Alamo after Dimmitt left on the first day of the siege.