Things you find in odd corners.

I was searching for something else when I came across this piece. It wasn't exactly that I had forgotten it, but once its purpose had been filled, I put the box in a corner.
A year and a half ago we made one of our regular visits to The Georgian House to attend a talk on 18th Century dress. One of the young ladies giving the talk was working on a piece of embroidery, so of course I had to go and speak to her. (No names, it wouldn't be fair to embarrass anyone.)
She had never tried surface embroidery and it wasn't going well. Someone had told her to use one length of thread without explaining that there were six strands. I don't think I need say more than that. She had also managed to get a massive and unentangleable (not sure that's a real word) knot. My heart went out to her. I explained that she should only be using one or at most two strands of the six, and that she was using far too long a length of thread. It was more fingertip to underarm than fingertip to elbow. She was keen to learn how to do it properly, so I said I'd come back the following week with a partly stitched piece.
As usual, I got carried away and by the time I returned I'd stitched most of this: 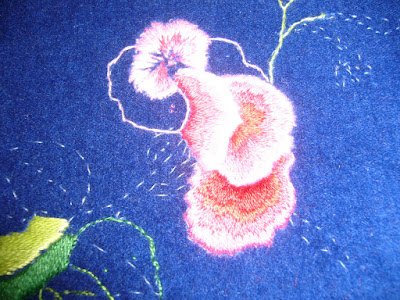 It's a flower spray based on a design I found in "18th Century Embroidery Techniques" by Gail Marsh, ISBN 978-1-86108-476-7. It's a pretty cool book, with lots of diagrams and pictures. The petals are worked in a single strand of Soie d-Alger using silk shading.
Let me say here that I hate doing silk shading on canvas, but I do like a bit of surface shading on other fabrics.
We talked about transferring designs. She had heard of pricking and pouncing, but not how to do it. My advice was 'Don't'. I suggested that she trace the main outlines of her chosen design on thin tissue paper and baste it through. In my opinion it's better than prick and pounce and much better than drawing the design on the fabric, and the tissue comes away easily if you use short stitches.
We talked about weight of thread, the above is all worked with one strand, the joys of French Knots, and stitch direction for silk shading. I also advised outlining areas such as the petals in a stem stitch to give a smooth curve and a firm edge.
Of course I also showed her how to do some of the stitches.
AND I hoped I hadn't bored the young lady to death.
The finished piece measures about 6" across and lives in an i-pad box. 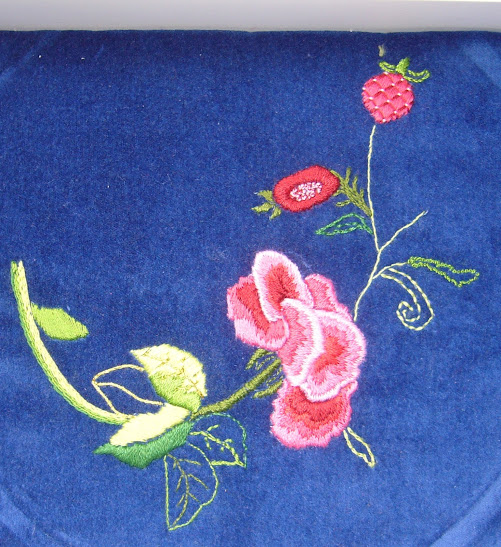