One and a bit years after our first lockdown things are starting to look more positive. I have had both vaccinations and Jane-Beth gets her second today. Lockdown is easing, little by little. The pubs are starting to open and I am getting back into the garden. Not my Dad's, the house has been sold, but I have a couple of friends who need what muscle I can provide, so with a bit of decent weather I will soon start to get rid of my lockdown flab.
And the dentist has reopened! What can I say? I dislike going, but I know it's necessary, and I haven't been able to go since March (last year).
I seem to have let this blog slip since the arrival of Covid. It's not that I've been doing nothing, but the time has been sucked up by other projects.
I have recently become a columnist for Needlepointers, the magazine of the American Needlepoint Guild. I was sort of volunteered for it, and it's been an interesting experience. The feedback has been positive too, which is a bit of a boost for the ego.
In an earlier entry I mentioned that my "Flame Fan" design has been selected as a class for the American Needlepoint Guild Seminar in 2022. I can see at least one column for Needlepointers and a future blog entry or two coming out of that!
"Would I mind if the other designs were offered to the Distance Learning Team?" I was asked. Of course I didn't mind. The ANG Workshop By Mail team asked if they could have "Golden Gyron". Ab-so-lootley! So it will be appearing in Needlepointers in a few months and will probably run from February to April 2022. 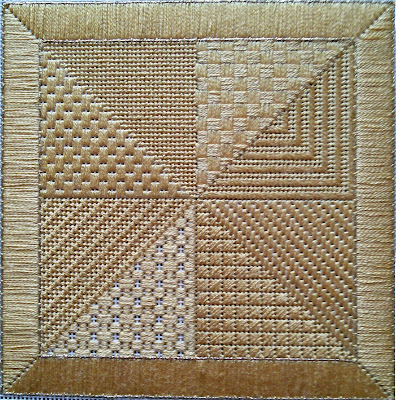 "Golden Gyron" is 5" x 5" and is worked entirely in gold, with the 50th anniversary of ANG in mind, but also as a sampler of stitches aimed at the less experienced needlepointer. I'm hoping it will go down well.
Work continues on 'The Big Project' which I hope to have finished for Seminar 2022. This is my first trial of how I might finish the beasts. The idea is to have them hanging, with the animal on each side, but with a different colour of background. I need to work on it a bit more! Luckily I have a couple of beasts that I'm not going to use, so I have material to practice on. 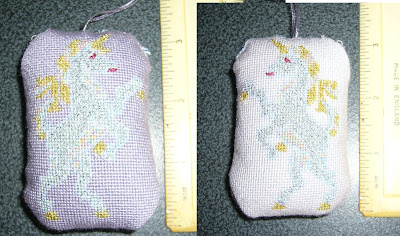 I've also been trying Hardanger, but my efforts so far are so execrable that I'd be embarrassed to put in a picture. Maybe next time.
On the down-side, no in person American Needlepoint Guild Seminar again this year. I'm not sure yet whether I will sign up for any of the on-line classes. However, I remain hopeful that next year at Tucson will go ahead (and that we'll be able to travel from Scotland).
Posted by Jonathan G Brown on Tuesday, May 18, 2021