Last time, I mentioned that I had been trying Hardanger. I started from the basics, using Janice Love's "Hardanger Basics and Beyond" and of course the support and advice of Jane-Beth who said that I should start with Kloster Blocks.
I tried to find an ISBN for the book, but I think it's self published. The back cover credit is to a shop called Love'nStitches in Athens, (Georgia, not Greece). One thing I loved about this book is that at the end of each section Janice gives instructions for left handed stitchers.
I always think of Hardanger as being white on white, but I decided that since I had no idea what I was doing I'd work with a coloured perle. I started with a vibrant orange on green. That was a disaster - vision wise - so I gave up and tried orange on white. Why orange? It just happened to be at hand, as did the teal and the red.
Kloster Blocks are simple. (Left side of image.) Well the basic stitch is simple, but then you have to remember how to move to the next block without leaving a trailing thread on the back. Trailing threads are a no-no. It's not that Hardanger is 'double sided', but as it's used for table cloths and such like, the stitches should be well enough finished that it should be difficult to tell front from back. I'm not going to embarrass myself by showing you the back of my doodle-cloths.
After Klosters, Buttonhole. I'd not tried that before. It didn't go well to start with, but it's one of those stitches you can get into a rhythm with - until you come to a corner. I got lost on them to begin with, but perseverance was rewarded.
After about 30 hours I have reached the stage of the image above and tried eyelets, which I had done before, wrapped bars (bottom right) and woven bars (top right) both new to me. I also managed to cut the wrong threads.
It still needs lots of practice, but 'The Mysterious Mr. G' of whom I have written before has decided that I am almost competent enough to make him a table-cloth. He may have to wait a little longer.
Speaking of whom, in earlier blogs I've mentioned his army of knitted bears, using which he plans world domination by teddy-bear. I recently received a picture of some of his minions starting their work. 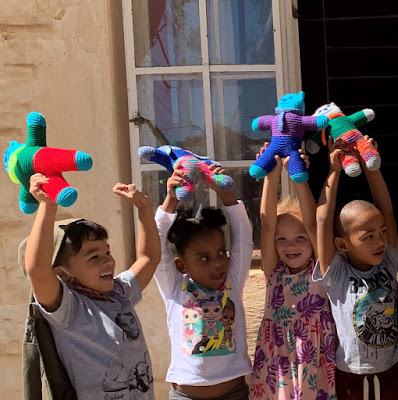