Return of The Pod People

As we come to the end of November, what we call "The Pod People" return. Looking out of my back window I can see this: 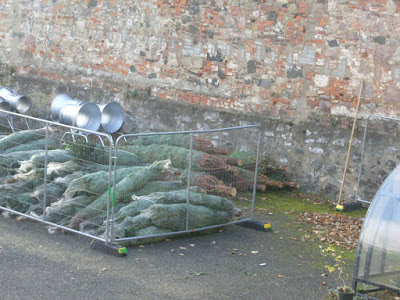 Every year at this time there is a gathering of Christmas Trees for distribution in the yard next door. Wrapped as they are, they always remind me of the 1956 film "Invasion of the Body Snatchers.
I think if you look at the still from the movie it's kind of self explanatory.

Back in May I mentioned that I had been selected to teach my "Flame Fan" at the American Needlepoint Guild Seminar 2022, in Tucson, Arizona. I didn't feel quite right about sharing "Flame Fan" until the classes were advertised, but as they are now up on the ANG website, I think its OK to do so. 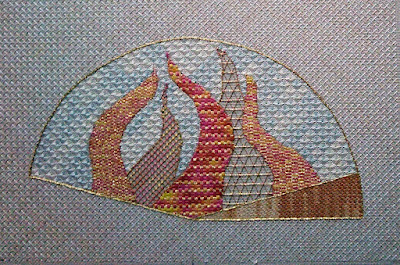 I was supposed to be running a pilot class this week, but due to various circumstances I have had to postpone it until the end of February.  (If you live near Edinburgh, places are still available.) I knew there was a lot of work in running a class, but I don't think I understood how much. Still, we live and learn.
Having done the grunt work, I'm looking forward, with a little trepidation, to the pilot, and then to the class itself, which will be in August.
Flame Fan is 7" x11", and is worked on Congress cloth. The flames are all worked in couched Kreinik gold, using the same variegated Anchor floss. Stitching time was about 30 hours.
I have been busy on other things too. "The Big Project" has come to a temporary halt because I haven't had the git-up-and-go to move on to the next stage. Mr.G's tablecloth proceeds in small increments, 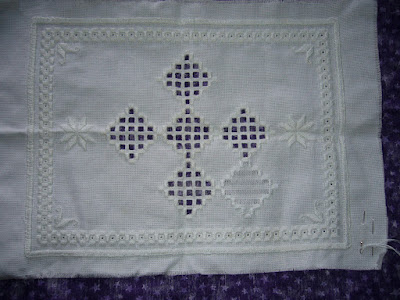 and another group of bears is off to a new home. 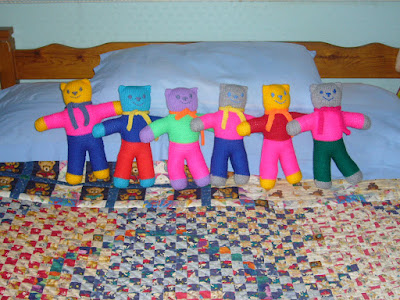 Not so many this time, which is good as I had so many other things going on, but the request for half-a-dozen was filled. They're obviously keen to get on their way, the fellow in the green trousers is already stretching his leg out towards the door.
Posted by Jonathan G Brown on Thursday, November 25, 2021