Eight months!! I blame the three L's. Lassitude, Life and Laziness.
I've been busy, but I couldn't share until after the ANG Seminar in Tucson. We got back last Monday and slept for two days, but now we're catching up.
To bring you up to date with "The Big Project" I kept mentioning, it was for the Exhibit at the ANG Seminar, so I didn't want it to be seen until then. It was both a risk and an adventure I will probably write more about later, but here is the finished article.
It's called "Heraldic Carousel" and measures just over 12 inches high. Each side is 4" across and the baseboard is 12"x12". 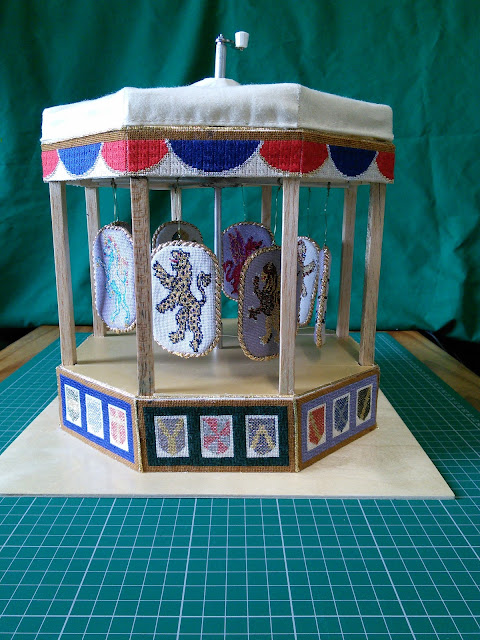 It does what it says in the title, it's based on heraldry, and it's a carousel.
The sides along the bottom are the heraldic ordinaries set in shields. The ordinaries are gold or silver (Or and Argent), with the couching on the shields in the heraldic tinctures of red (Gules), green (Vert), blue (Azure) and Purple (Purpre). The background to each panel is Milanese stitch, also in the heraldic tinctures, with a Basketweave border in brown.
The creatures are the heraldic beasts, Unicorn, Leopard, Griffin, Hippocampus, Lion, Dragon, Sea Lion and Wyvern. They are all double sided. The 'beasts' are worked in Kreinik braids and the background in Soie d'Alger, in Basketweave.
Above them, the red and blue swags, are Beattie stitch turned on its side to emulate hanging fabric. The tent like top is natural calico.
All the embroidery was worked on Congress Cloth.
The frame is balsa wood, because it had to be light enough to carry, and inside is a musical movement which plays Brahms Lullaby when the handle at the top is turned.
I have to say that when I submitted this as an Exhibit entry I had no expectation of winning anything - possibly an Honourable Mention because it is a bit unusual. The main reason for creating Heraldic Carousel was to make people look at it and think "S**t! You can do that with Needlepoint? Wow!" It certainly got that reaction.
Surprisingly (to me), when it appeared in the Exhibit it did so with a Blue Ribbon - First in Professional Original! Later in Seminar it was also awarded "Creative Inspiration" and, I had to stuff my napkin in my mouth to stop me screaming when the next one was announced, "Best of Show". 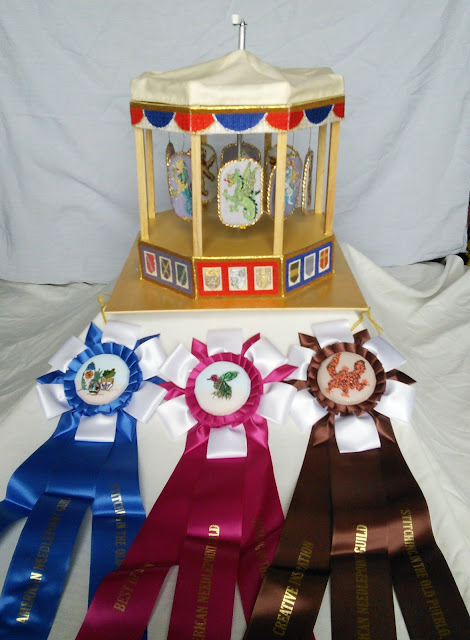 Ribbons are so cool. Creative Inspiration is a beaded Gila Monster, Best of Show is a perfect little hummingbird.
And did it work?
It took me nearly 900 hours to make Heraldic Carousel. There was much failure, much pain and much heart rending, and I doubt if I'll ever do something like that again.
Posted by Jonathan G Brown on Tuesday, August 16, 2022